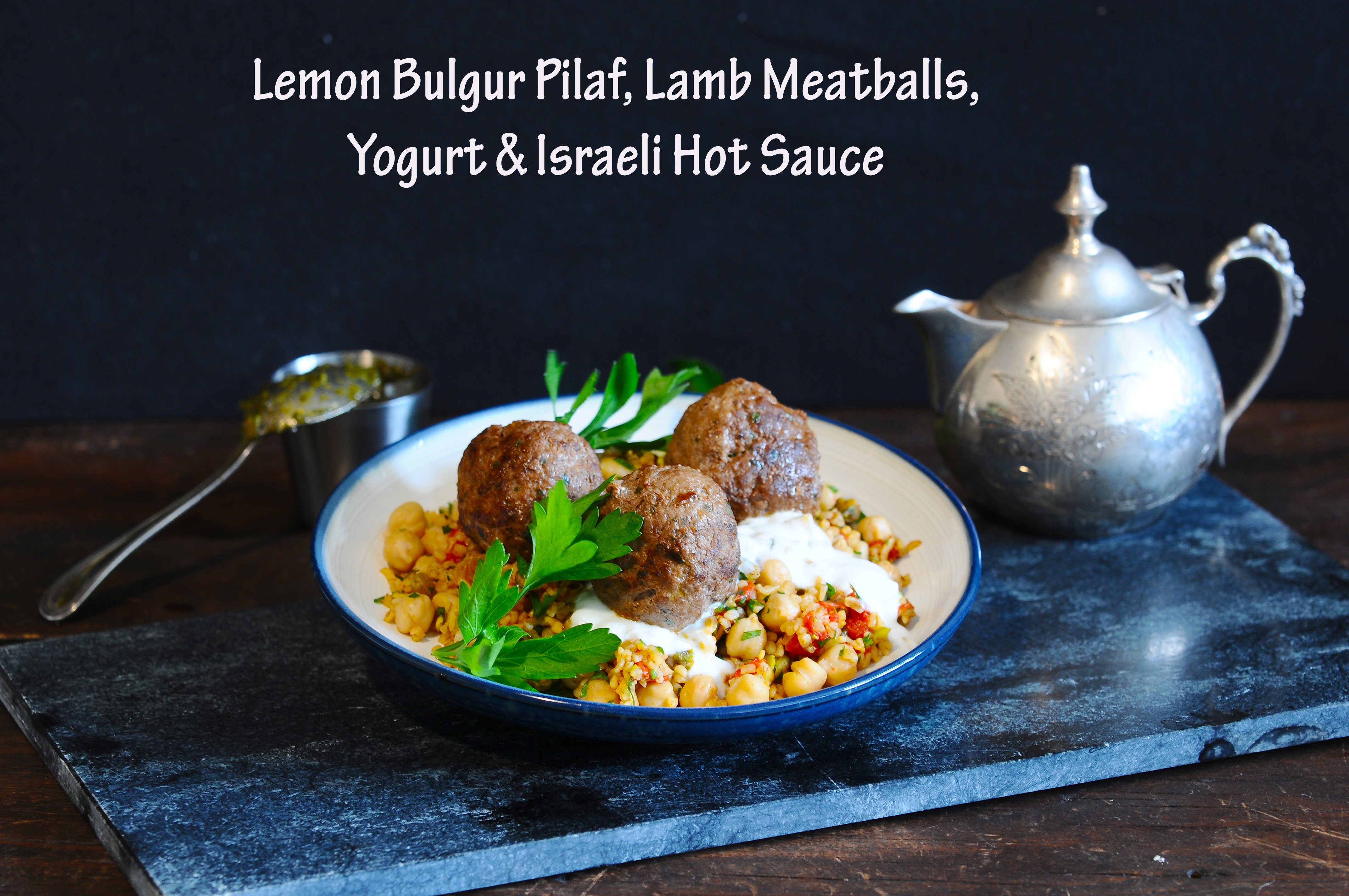 It is 8:45 pm on a Sunday, I’m sitting on my computer and posting my new Mediterranean-inspired recipe that I think is good enough for a dinner party or a weeknight meal.  Lamb meatballs despite their simplicity and comfort food status, done right, are telling a story in their own way about commitment, passion, and quality.  There is a saying in cooking, “do it right or don’t do it all”. 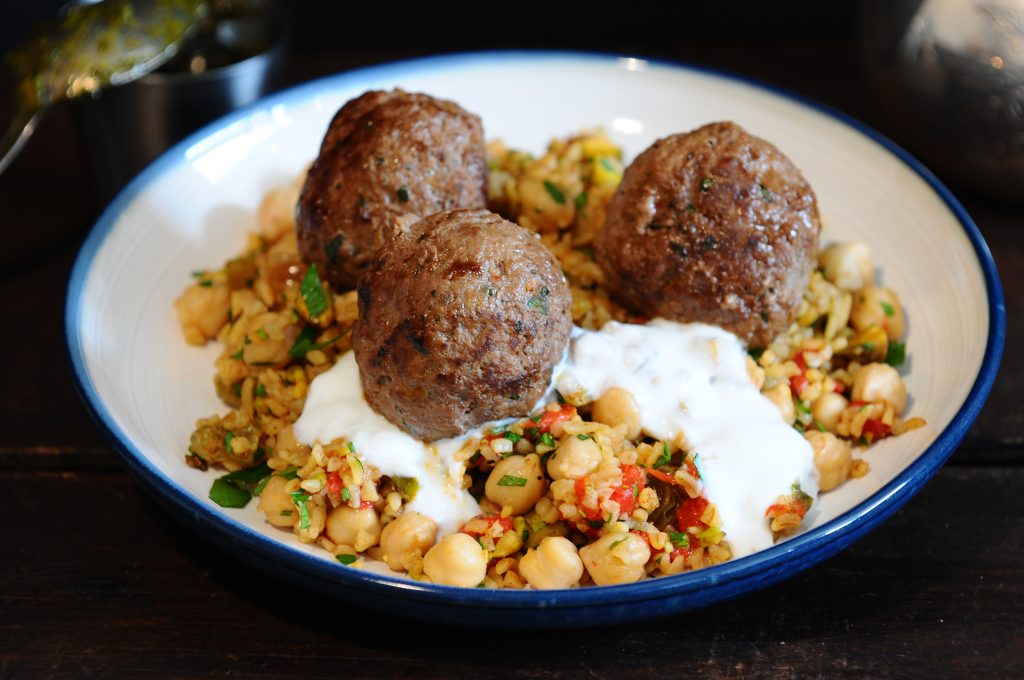 There is something intriguing about the process of making great lamb  meatballs, maybe it’s the simplicity of how to make them, or the complex ethnic flavor that can be achieved with the right selection of herbs, spices, texture and flavor.  I’m adding a few teaspoons of  Ras El Hanout to my meatballs, a Moroccan spice blend.  The name in Arabic means “head of the shop,” and literally refers to the best spices the store has to offer. Moroccan cuisine is rich in spices, and it is only natural when you consider the age-old spice trade from Arabia to North Africa. 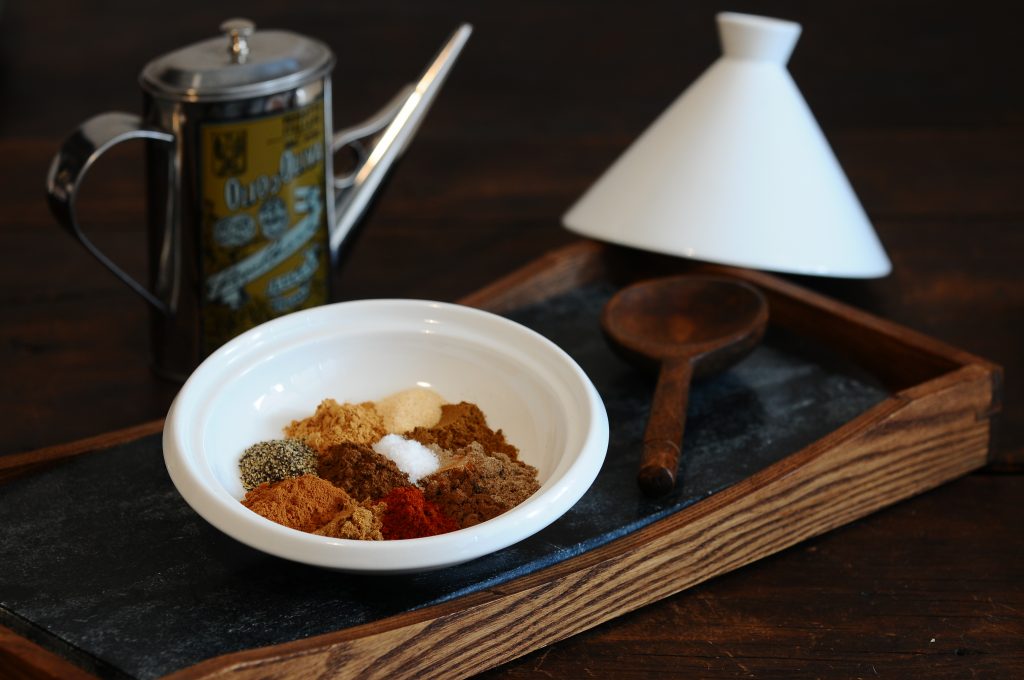 It has been only 2 weeks and I have cooked the recipe 3 times.  Three.  Basically, it tells you that I love bulgur pilaf and meatballs and with it the awesome Moroccan flavor of cinnamon, cardamom, cumin, lemon, raisins and fresh herbs. 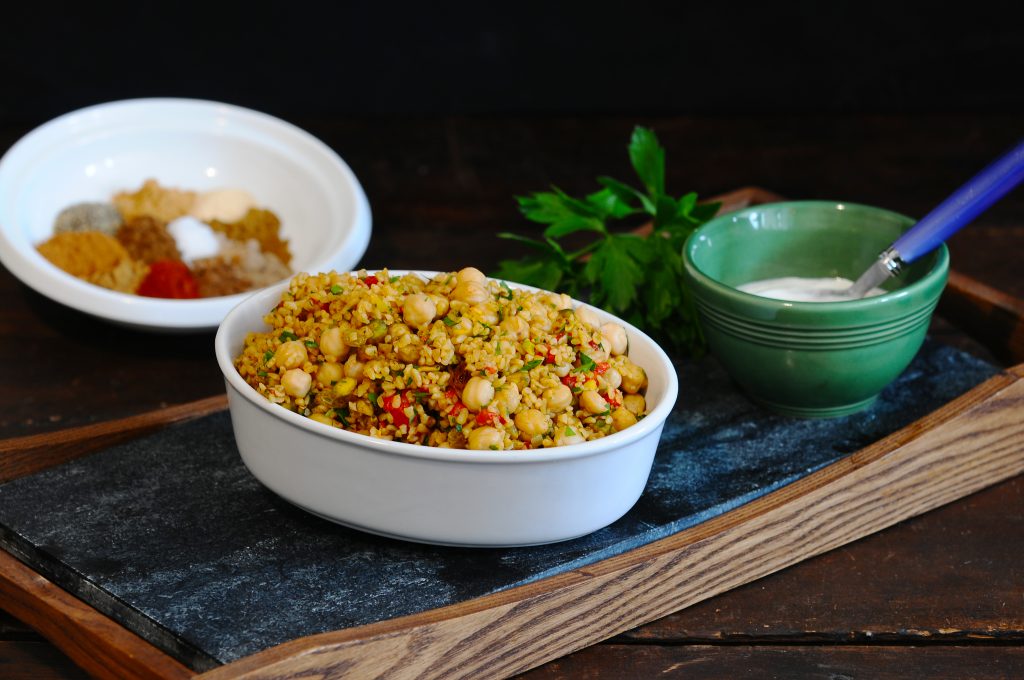 The Israeli Hot sauce provides another flavor aspect and adds a nice kick.  Israeli hot sauce, originally from Yemen, prepared with tons of fresh cilantro, spicy Serrano peppers, garlic, cardamom, and cumin, is basically another version of a Chimichurri. 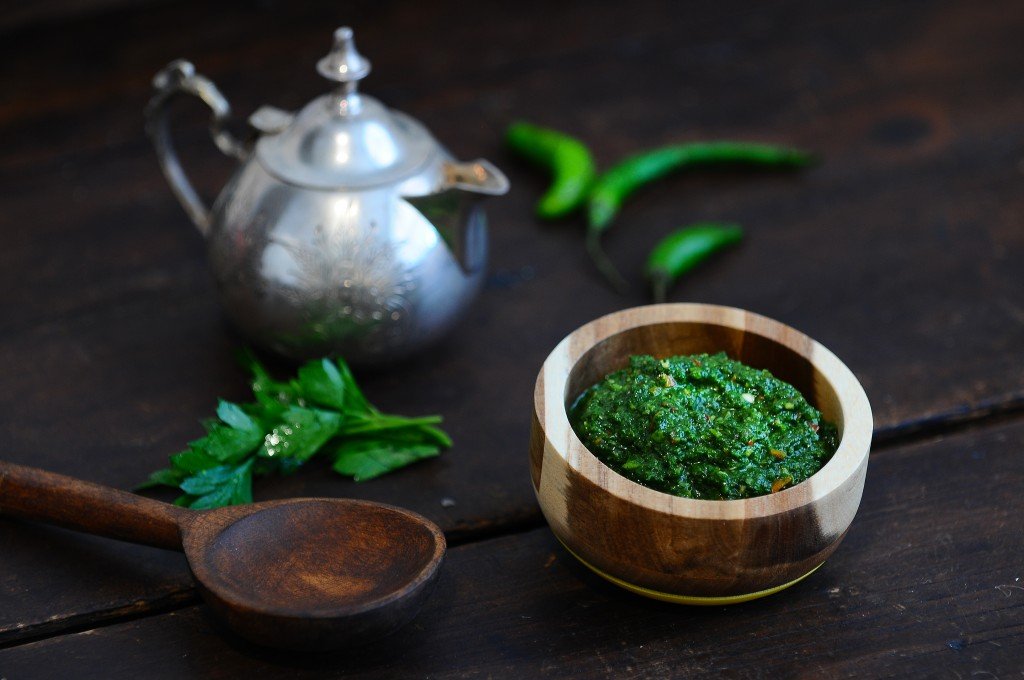 Bulgur is made from wheat berries that have been cleaned, parboiled, dried, ground/cracked  into particles and sifted.  A staple of Indian, Turkish and Middle Eastern cuisines for centuries, bulgur tends to be most well-known in the US as the main ingredient used in tabbouleh. 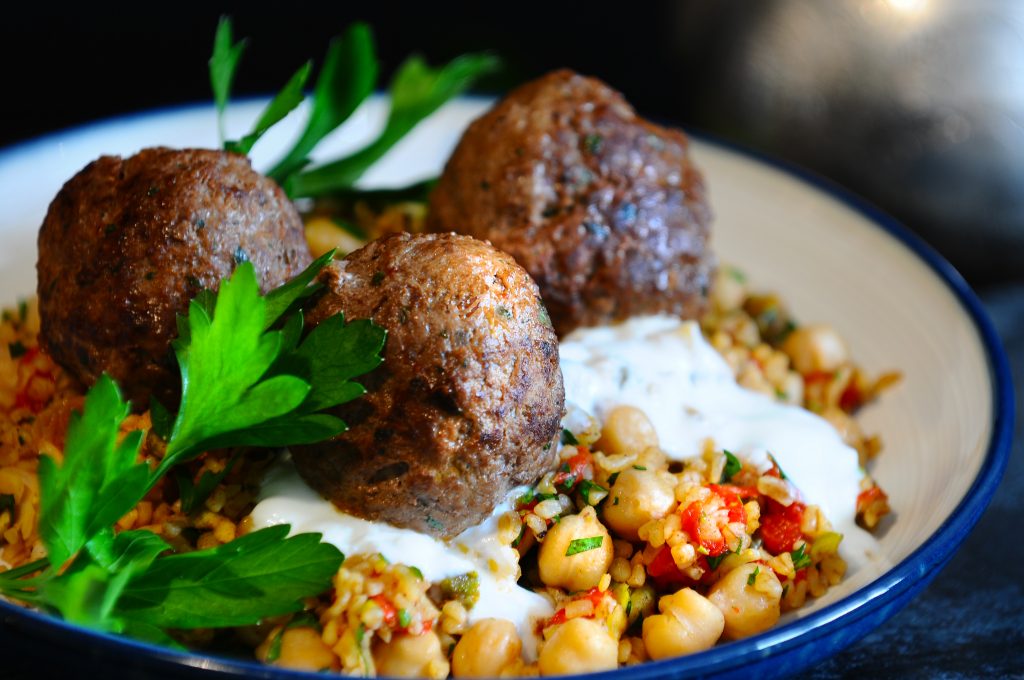 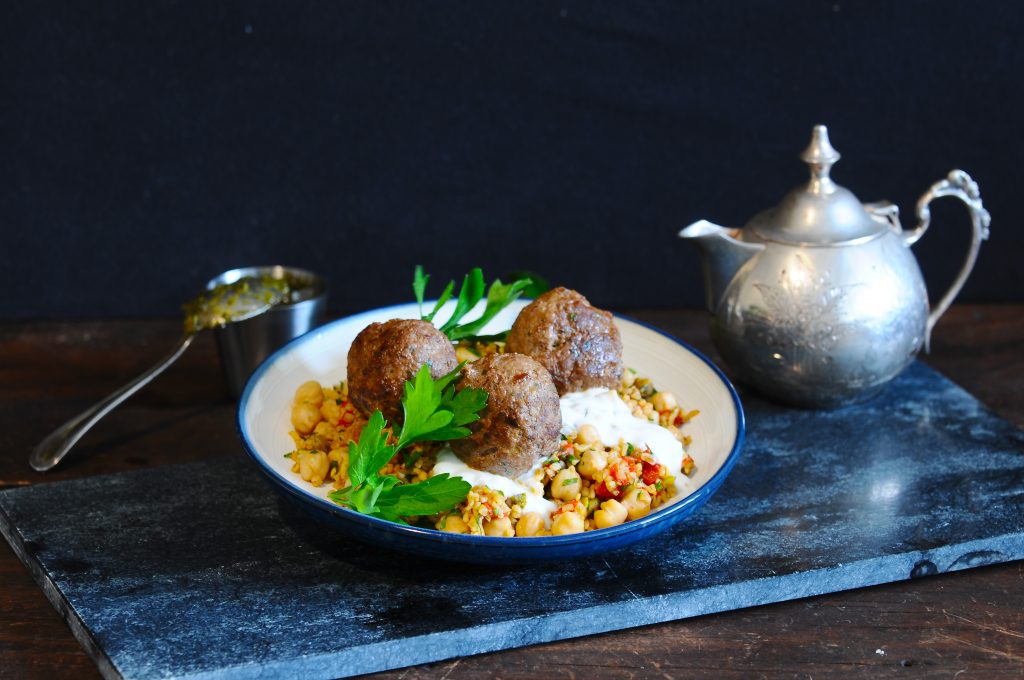 Another reason to eat Bulgur is that it is low in fat, high in minerals; on top of this, bulgur wheat provides a very good dose of the dietary fiber you need for digestive and heart health.  Over 25% of your daily needs in every one-cup serving!  A cup of Bulgur has only 150 calories, 8 grams of fiber and nearly 6 grams of protein.  The ancient grain has been called many names over the last 4,000 years, ancient Babylonians, Hittites and Jews called this wheat product “arisah,” which is how it was referred to in the Bible. 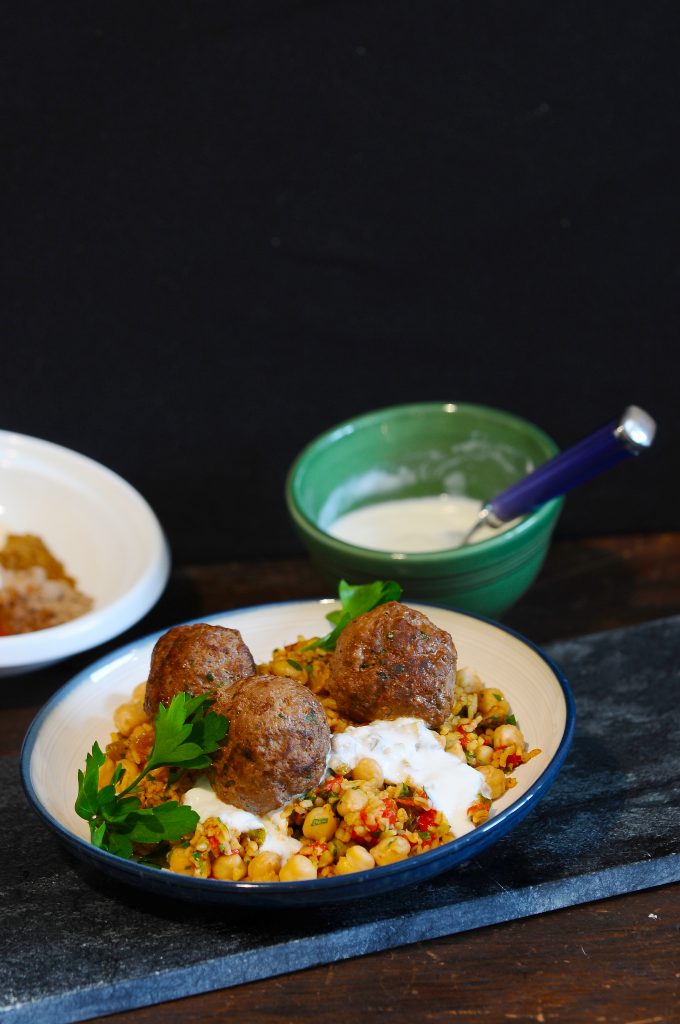