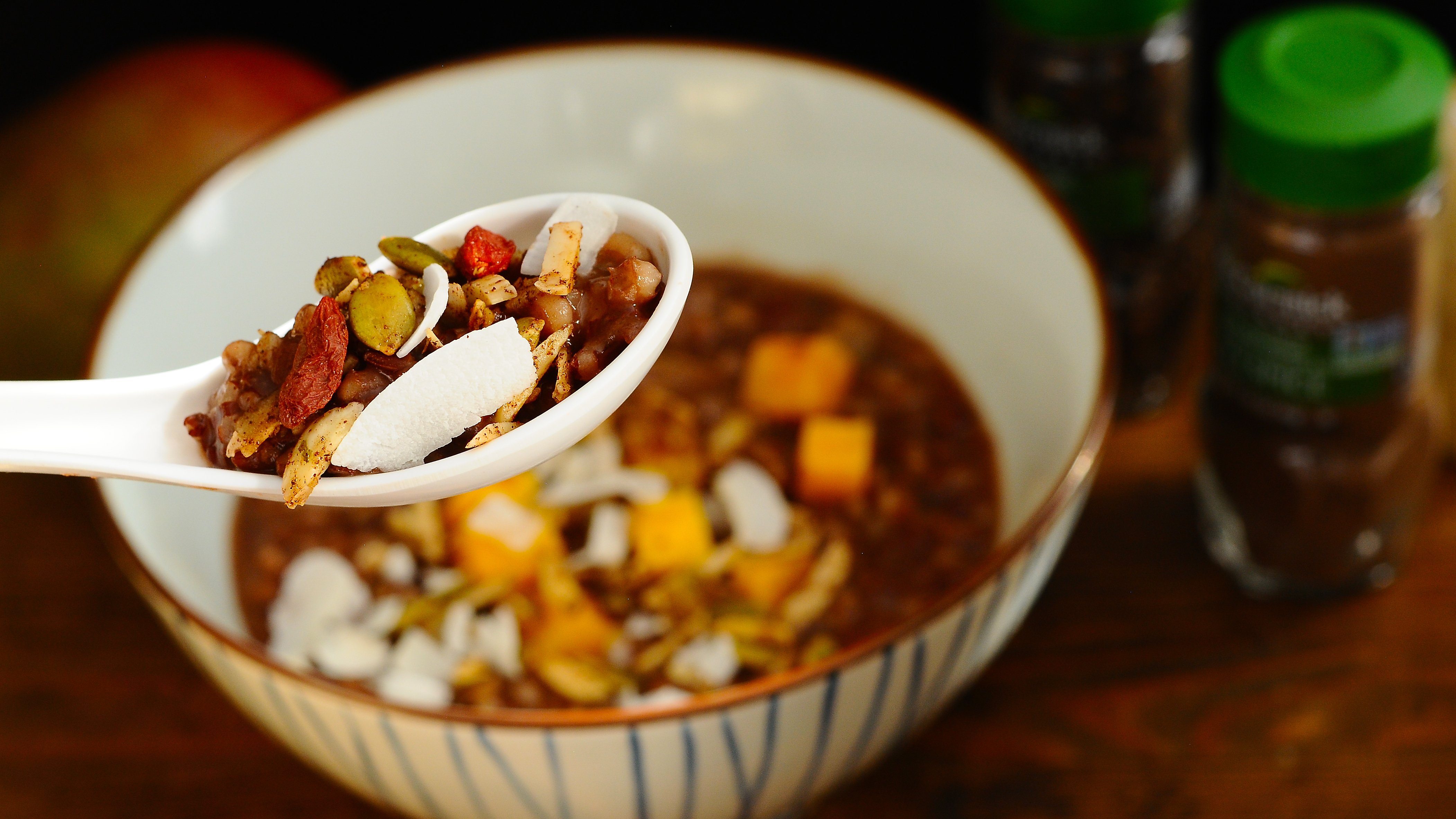 Congee cooked with red rice and barley, topped with mango and coconut is a recipe from a McCormick flavor forecast.
Chef Len King is the Senior Research Chef at McCormick Spice Company, or as I call him the Spice King. Chef Len is the culinary mastermind behind the McCormick flavor profiles.
I have known Chef Len for many years and worked with him on several projects.
Over the years I have truly appreciated his support and expertise in regards to flavor applications and his deep knowledge of creating flavor profiles.
Chef Len’s expertise and understanding of healthier options are priceless, especially his knowledge of how to reduce sodium by using various spices.
Flavor created with spices and mindful cooking methods can heal and create pleasures, so if you want to explore the flavors of tomorrow today, check out the McCormick flavor forecast.

What a great culinary – flavor team at McCormick Spice Co.  I LOVE it, their mission is to save the world from “boring” healthy food and share healthier, flavorful recipes that can be enjoyed every day.

Congee is a Chinese rice porridge. If you want something different and want to add QI or vital energy to your day, start cooking congee. By the way, QI is also a handy word to know in Scrabble.
In many countries of Asia, congee is on the breakfast table and it has to offer a lot in regards to wellness.
The rice is usually cooked with 10 times the amount of water, slow-cooked for hours until it falls apart, this makes congee an ideal meal to gently start your digestive metabolism.
In its most basic form, congee is low in calories, and it is not very nutritionally rich.
Adding fruit, nuts, and other mindful selected items to your bowl will kick up the congee’s nutritional profile while keeping the traditional cooking method.
Try to look at it like a bowl of oatmeal or grits, where you add herbs, spices, fruit, meats, and flavorings, etc. to kick it up a notch. 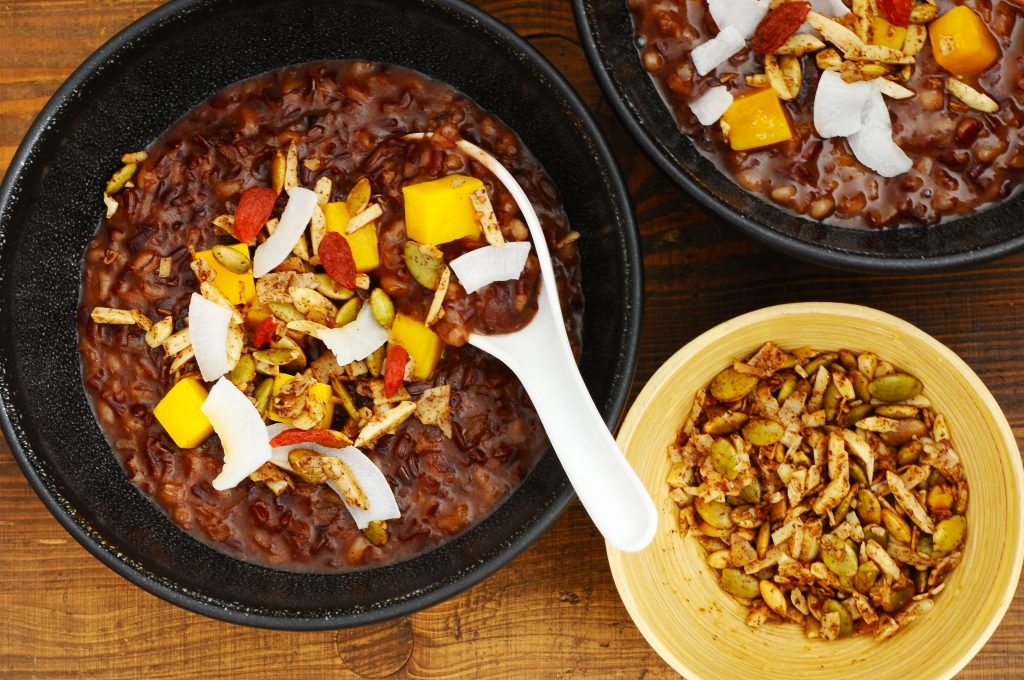 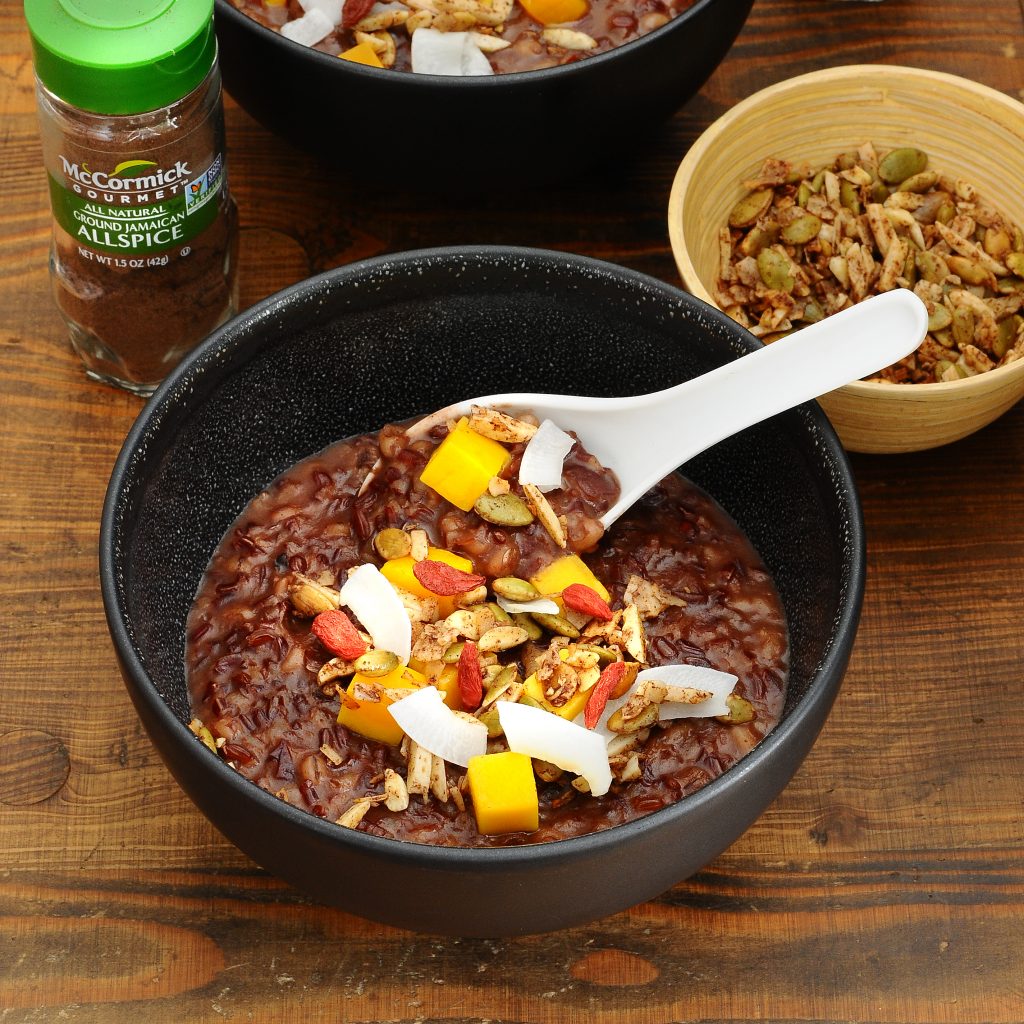 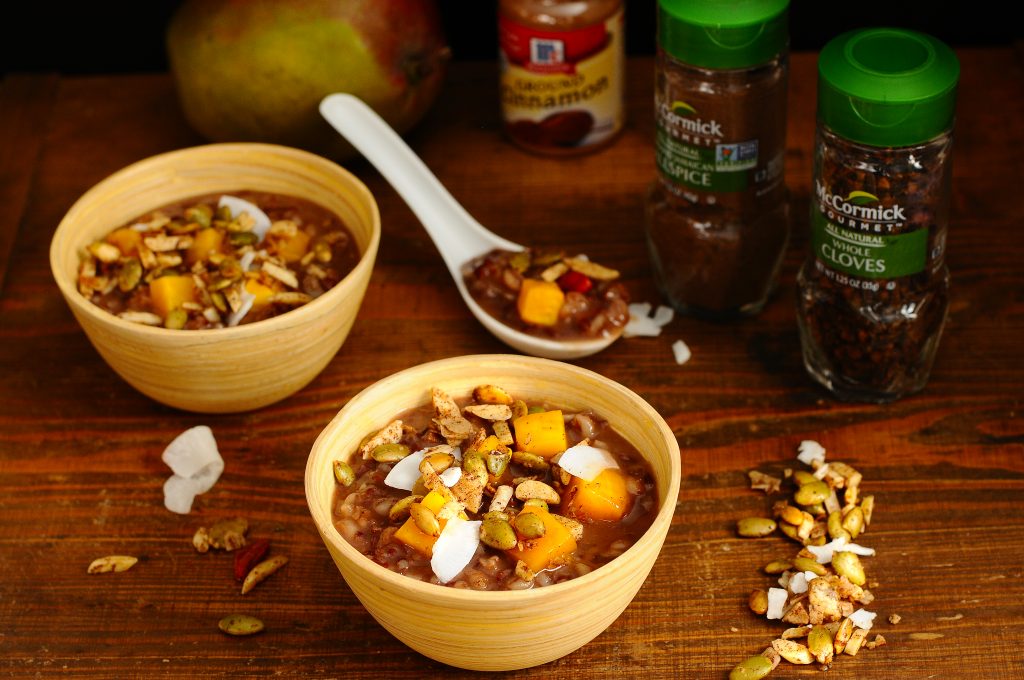 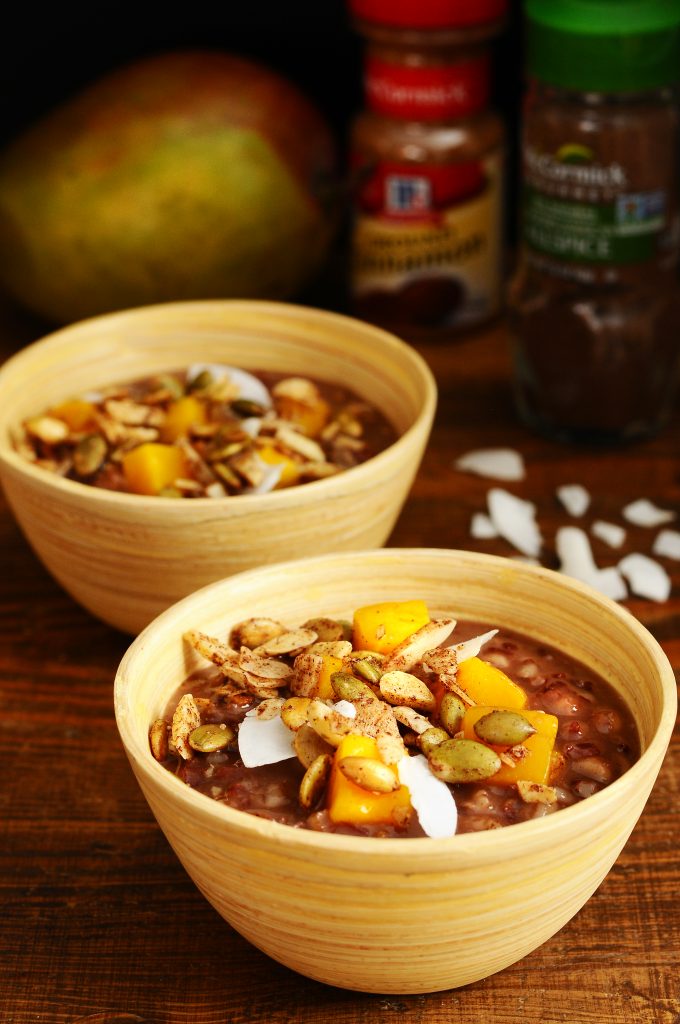 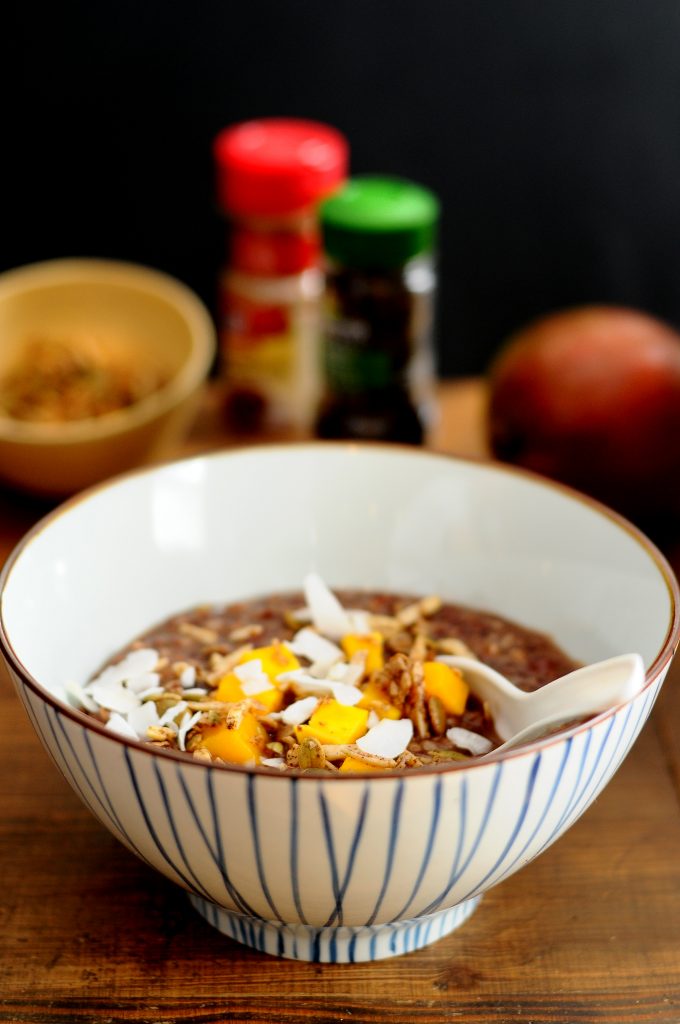 I went to dinner with friends at Sun Wah Bar-B-Que in Chicago and ordered the congee with lean pork and century egg. Sun Wah Bar-B-Que was a little hole in the wall that opened in the spring of 1987, in its original Argyle Street location.
Well before it became the place of ethnic Asian dining, it was known for awesome food based on old family recipes like congee. I highly recommend the Peking duck which is carved tableside.  As a second course, you are served a delicious duck broth and duck fried rice. 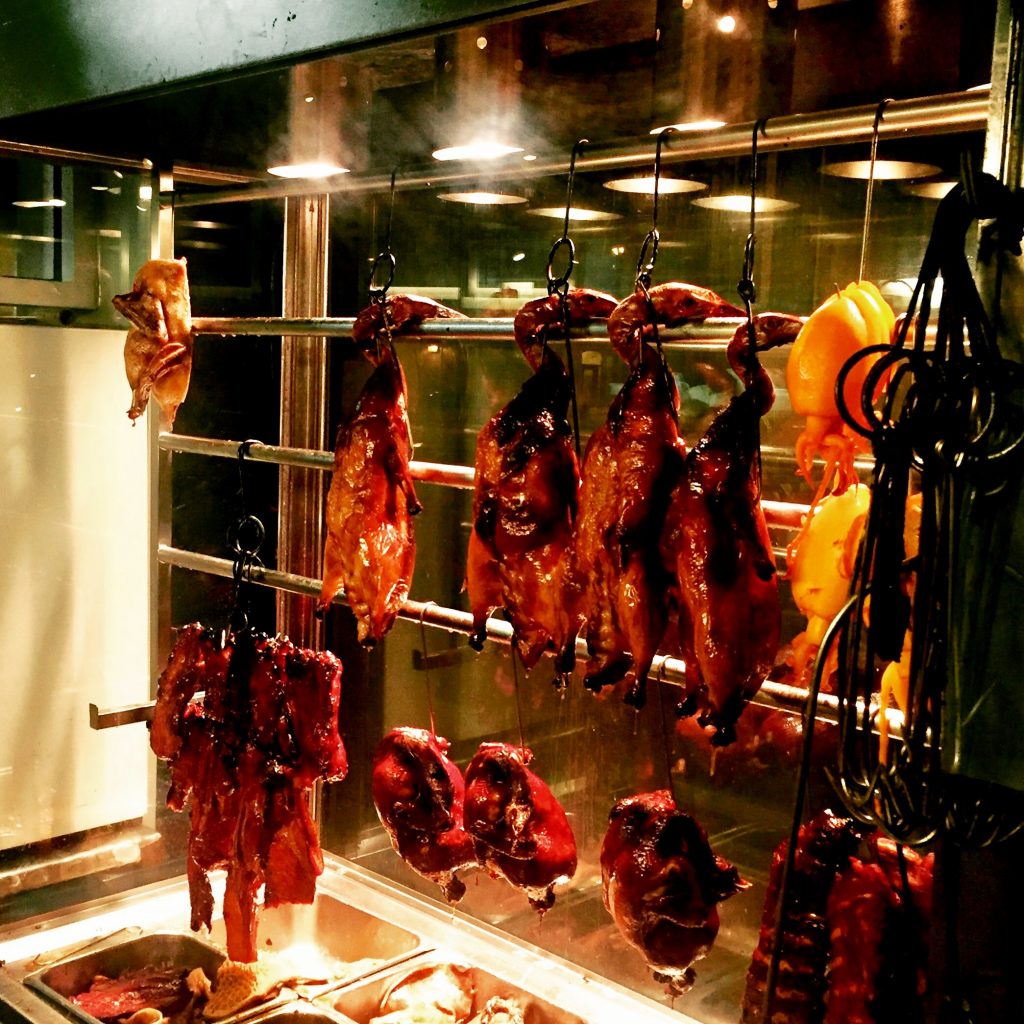 As with many immigrant operated restaurants in Chicago, English was optional and marketing was word of mouth. The restaurant mission statement, according to the owner Mr. Wang,
“We’re going to keep it pure because that’s what people are coming to us for”.
The selection of congee on the menu was impressive: pork, stomach, kidney and intestines – beef, shrimp and squid – minced beef – lean pork and egg – tender beef – fish fillet – pork kidney and plain porridge.
Congee is creamy and mild, and to be honest the basic version has to be the blandest food you ever love. You need to remember that at one time in China, congee was born out of necessity. Rice was hard to come by and it was a way of stretching a meal in times of need. 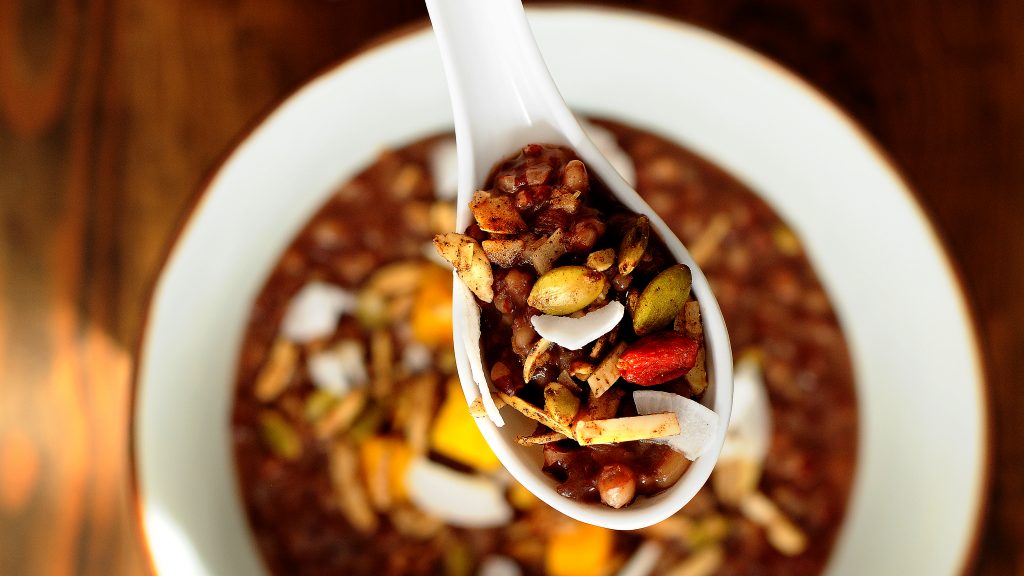 In Chinese cuisine, rice congee is the food that adds the “QI” to your day, the belief is that the longer you cook the porridge the more “QI” or vital energy you generate. 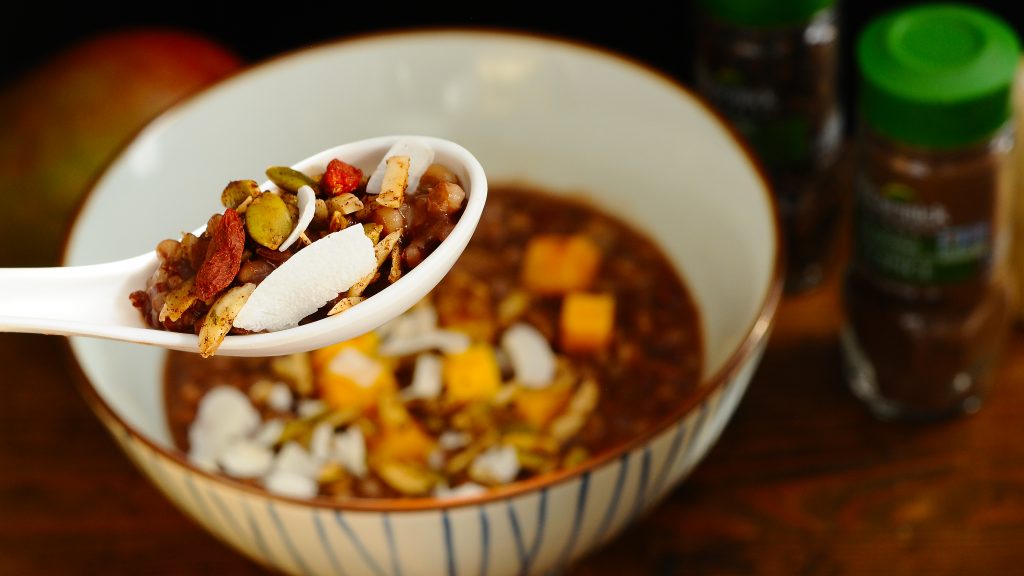 The McCormick version finds its sweeter side, with a mash-up of red rice, pearl barley, cranberries and warm spices like cinnamon, ginger, allspice, and cloves.
I found the red rice and barley congee to be smooth and delicious, the spices elevated the congee to another level.  Red rice is a great source of fiber,
What sets red variety apart from its brown counterpart, is that red rice is greatly enriched with antioxidants which are very important to good health.
Congee in its basic form, with mindful additions, is low in sodium, cholesterol, fat, sugar and calories. There are dozens of versions of congee, sweet and elaborate savory versions that can contain fish, meat, vegetables, herbs, spices, grains, condiments, broths, and stocks. 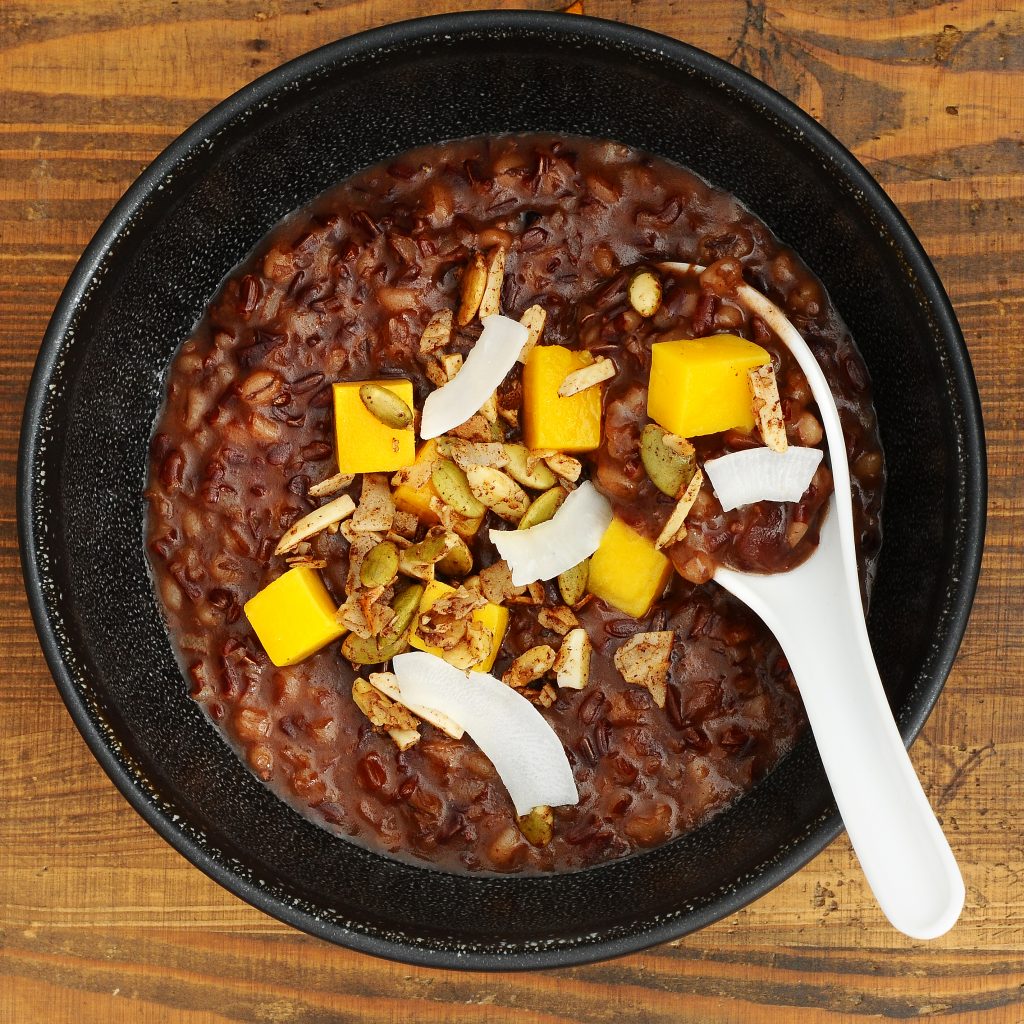 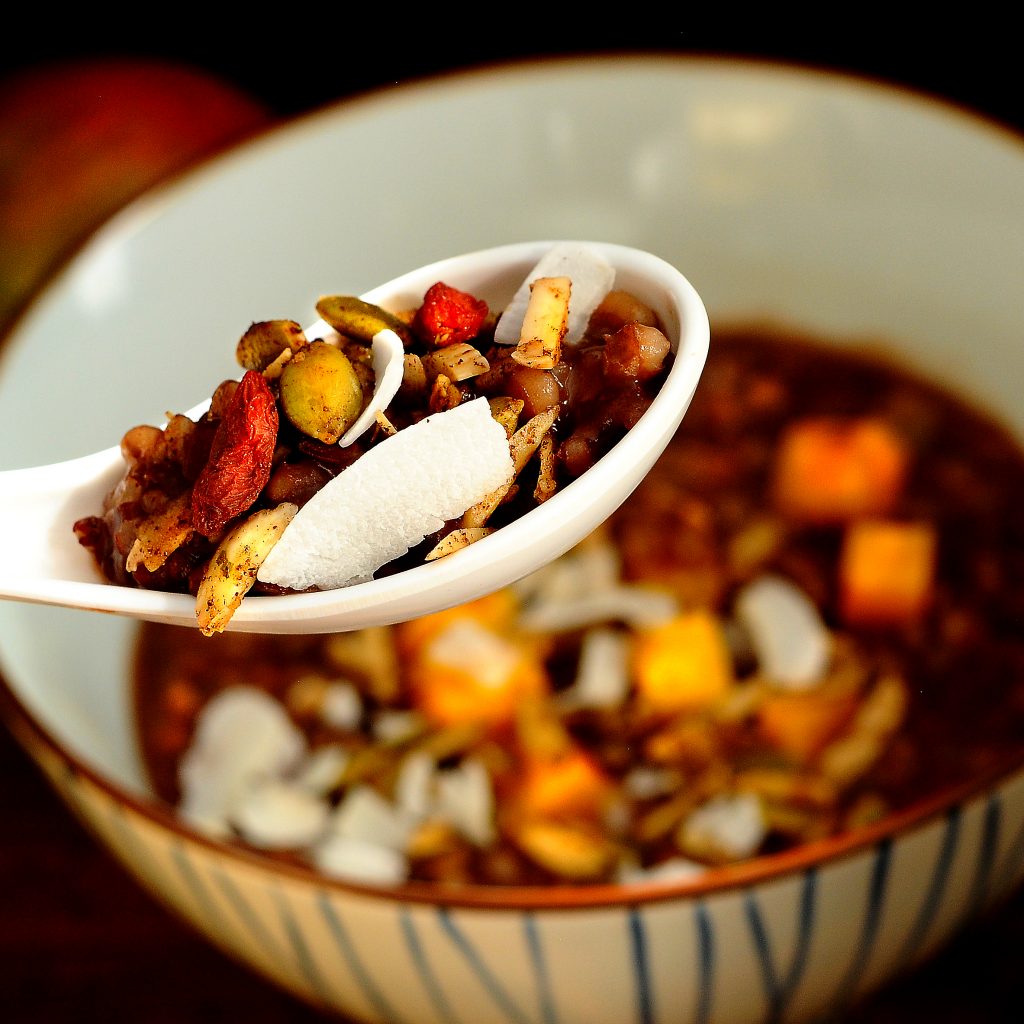 Flavor & Fortune a blog dedicated to the art and science of Chinese cuisine shared that a Qing dynasty manual on porridge by Huang Yungu lists two hundred thirty-seven different ways of preparing this bowl of comfort.
So here it is, the sky is the limit, sweep your refrigerator and pantry and start to explore the flavor and creative cooking.